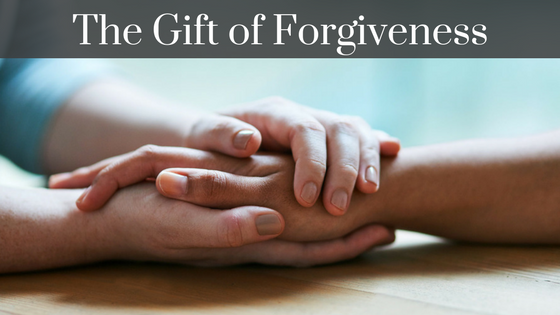 Have you ever done something for which you needed to be forgiven? All of us can probably relate to a break or schism in communication, relationship, integrity or honesty for which we were responsible. Handling problems in communication are much easier when both people played a part; and in fact, most of the time, “it takes two to tango.”  However, we can all think of times when we were the culprit. We broke a promise or a confidence. We cheated on the test or lied on our resume. We were the ones speeding dangerously in that school zone. Or perhaps much, much worse.

What do we do with these indiscretions, these errors of judgment, these outright actions meant to hurt or destroy others or to protect ourselves?  True moral culpability is different than the false guilt that mentally disturbed people feel. This is not some overly destructive super-ego criticizing us for not ‘cleaning our plate’ or not washing our hands after using the toilet.  These are, if you will, true ruptures, genuine breaks in a relationship with ourselves, others and God. Every religious system has some set of guidelines, rituals, or ideas meant to cleanse, eradicate, forgive, or heal such inner wounds of the soul.

Christ followers believe that we can truly love God only because God himself first loved us (I John 4: 19-21), so it follows that we can only learn to love and forgive by being loved and forgiven.  However, many of us grew up in homes where grudges not forgiveness was modeled. We may never felt forgiven or anything.

(Kubler-Ross, 1969) wrote a now famous book, On Death and Dying.  Over the years, others have examined her stages of death and dying and applied them to other emotional, psychological or even spiritual areas.  I first came across this idea years ago when Linn and Linn (1978) wrote Healing Life’s Hurts Through the Five Stages of Forgiveness. Over the years I have incorporated their schema into my daily life and work. Let’s look at it together.

Walking Through the Stages of Forgiveness

The first stage of forgiveness is DENIAL.  I can only forgive that which I am able to acknowledge.  If I deny I have been wounded, I am not able to forgive. If I deny that I have failed in some manner, I cannot be reconciled with the person offended. If I only acknowledge a little of the offense, that is all I can forgive.  The rest of the pain and hurt will remain unconscious and eat away at me unawares. In our culture, it is easy to say when someone says “Please forgive me” to respond with “Oh, it’s okay. No big deal” which denies or discounts the offense and thus limits the ability of the offender to receive reconciliation. When someone offends us, we will do better to respond “Yes, that did hurt me, but I do forgive you” no matter how slight the offense may seem to us.

How do I come out of denial about where I have been wounded and need to forgive, and where I have offended others and needed forgiveness?  The Scriptural principle is to humble ourselves and give God the right to reveal to me what I have denied. The job of the Holy Spirit is to counsel, guide, teach and convict of sin and goodness.  This process Is the opposite of what our culture tells us to do, yet it has worked over the centuries for millions of people.  One way to do this is to write down a list of everyone who has ever offended you. When I did this years ago, it was a long list. Some items on the list we may come to realize have already been forgiven, and now it is time to forget them. Others, although petty (like the kid who stole your cookie at lunch in third grade) may still ‘stick in your craw’ and thus, need work.

If I am seeking to make amends and be forgiven, the 12 Step process used by various recovery groups is a great place to start.  One part of this process is to list all the people who you know have been impacted negatively by your attitudes, actions, and lifestyle. You might also ask family members or friends in what ways you may have let them down or hurt them in the past. Obviously, you would have had to already do some repair work with these folks for them to even talk to you!  However, feedback is a place to start.

The second stage of forgiveness is Anger. One thing to remember about the stages is that they are not discreet, meaning you do not finish on completely and then move on to the next. People find that they go back and forth in the stages during the process, and even have to start over again when new wounds are revealed. Anger is one of those emotions we do not like to examine. Some of us were taught to feel guilty if we became angry and were shamed or even punished for the feelings. I have seen situations where children were not allowed to dislike something or voice mild objection to what they were asked to do.  I would guess it would be very shameful for these same children to be angry with a parent or authority figure.  So, you may find this stage distasteful or difficult. I tell clients to “give themselves permission to know what they know and feel what they feel.”  Start journaling or talking out loud in the car about the things which have triggered your anger. Notice when the feelings surface, and wherein your body you notice them.  Often, we feel our anger in our physical body before we feel it in our emotions.

During this stage, it is important to be gracious to oneself. It is so easy to want to excuse or minimize the wound or hurt. “Oh, he was drunk and did not know what he was doing” or “She’s so much better than when we were kids, why should I feel this now?” We want to get past this stage of forgiveness because feeling this anger is so uncomfortable if not frightening.  Honesty with ourselves and a bit of gracious patience helps us move along even though it is very difficult.

The third stage of forgiveness is Bargaining. This aspect is where we begin to consider forgiveness as a possibility.  “Well, I could forgive him if I know he’ll rot in Hell.” Or “If she admits what she did and asks for forgiveness, then I will forgive her. She has to come to me first.” Or “If I never have to see them again, I might be able to forgive.”  We start figuring out conditions under which we could imagine ourselves letting go of the anger and working towards forgiveness.

Sometimes at this stage, it is easy for well-meaning friends to push us towards acceptance when we are not ready yet.  Often, they may not realize that the ‘event’ or ‘circumstance’ we are trying to forgive is symbolic of thousands of times that type of thing was done by the offender.  I asked a client if they were ready to forgive their spouse for not letting them sort through their own things when they went through a divorce.  The spouse just had someone else throw all the personal belongings in plastic bags. My client said, “No, because it is just one example of where I never had any say in the relationship.”  So, when others push you to “just let it go,” and you are not ready, it is okay to say “NO!! Not yet!!” That is what the Bargaining stage is all about.

The next stage of forgiveness is Depression. This step is where you feel sadness over what has happened and even grief as you face the losses involved.  Sometimes it involves seeing what your own part in the dispute or rupture has been and feeling sad about it. Most people are capable of recognizing the sorrow involved in this forgiveness process, and this stage gives them room to explore it without being overly dramatic. In this stage, you may need some emotional support from a close friend or a pastor, or even a psychologist. Letting go of past woundedness is a journey we are not meant to do alone. Some of us are more prone to depression, and so when this stage comes, we feel extra low. It is perfectly fine to reach out for support.

The final stage of forgiveness is Acceptance. Again, the stages are not discreet, and most people find themselves going back and forth in the list for a while. However, at some point, the acceptance comes. You feel at peace. You no longer need to keep your anger close to your heart. You are ready to release yourself from the bondage of bitterness or resentment. You find you no longer need to harbor the pain as a way of protecting yourself. Acceptance does not mean we think it is okay or good that the offense happened or that the person wounded us.  You are accepting that it did happen, but recognizing you are moving beyond that point in time.  By letting go of the memory, and its power to hurt you, you free yourself to live in the now, not in the past.

A person asked me if it is ‘fair’ that they as the victim of someone else’s abuse should have to put so much effort into being healed. “Why should I be the one who has to work so hard, when they were the ones who caused my injury?”  Acceptance means you acknowledge that is it is not ‘fair’ but necessary for you to no longer be controlled by the events of the past. Life is not fair.  We all want it to be, but acceptance means coming to terms with the reality and moving on. Forgiveness, done correctly, is hard work. It does not come easily nor quickly. Yet the reward at the end is peace and joy and goodness, and these are rewards worth fighting for.